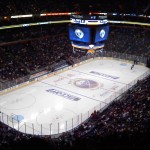 The Philadelphia Flyers are a professional ice hockey team based in Philadelphia, Pennsylvania. They are members of the Metropolitan Division of the Eastern Conference of the National Hockey League (NHL). Part of the 1967 NHL Expansion, the Flyers were the first expansion team in the post-Original Six era to win the Stanley Cup, victorious in 1973–74 and again in 1974–75.